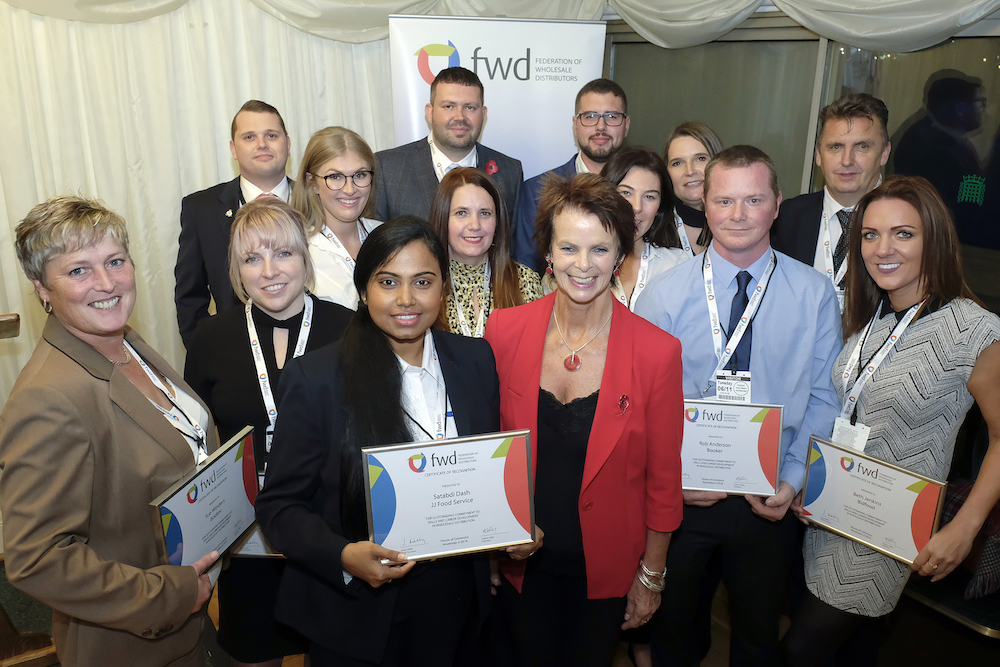 The wholesale sector is a “trailblazer in fostering and developing talent,” according to the MP who hosted the FWD’s Skills and Development Awards at the House of Commons.

Presenting 14 future stars of wholesale with certificates recognising their investment in building a career in the sector, Enfield North MP Joan Ryan said: “We know there are no jobs for life, but there are transferable skills for life, and it’s important that employers are making it possible for people to upskill, so it’s commendable that the wholesale industry is doing this.

“Wholesale is not a very visible part of our economy but it is a very big part and provides good quality local jobs. One in five employees in the wholesale industry are aged 16-24 and one in 10 are either doing apprenticeships, or have other vocational or work-related qualifications.

“The industry is a trailblazer in fostering and developing talent. It plays a vital role in creating and supporting good quality jobs and it’s essential that we as parliamentarians do all we can to support you.”

The award winners include warehouse workers, drivers and management trainees, all of who are undertaking apprenticeships, vocational training or academic study arranged by their employer. Among them was Sue Winders of Booker Liverpool, who became the wholesaler’s first female employee to achieve the Institute of Meat’s Master Butcher Award, and Satabdi Dash, who is the first woman to get her licence on all JJ Food Service equipment including a reach truck, pallet mover and fork lift.

They were congratulated by Skills and Apprenticeships Minister Anne Milton, who also praised FWD member companies for providing the framework for apprenticeships, skills development and mentoring.

Ryan told the winners: “Each and every one of you is a credit to your employer and the communities you represent. You are an inspiration to us here in Parliament and to everyone in the businesses you represent. The qualifications you’re achieved and the training you’ve had will never be wasted and will make a huge difference in your lives, and your jobs, and the industry in which you work.”

FWD Chief executive James Bielby added: “FWD members have a strong commitment to fostering and developing talent within our colleague base and have a strong cohort of apprentices and trainees. That is why we are here today – to recognise and support the contribution wholesalers make to creating sustainable, high-skilled jobs for the future.”

All four of these leadership trainees started their career at Costco in modest roles – as a front-end assistant, an optical clerk, a meat wrapper, and in member services. Each has worked their way up through the ranks and into supervisory roles. They have been nominated by their warehouse manager for training on the Costco University 101 Leadership course. This will give them valuable career skills including the role of the supervisor/manager, Communicating for Results, Managing for Performance and Effective Teamwork. Combined, these four award winners have an impressive 31 years’ experience working at Costco.

Steve Cadwell has been working at Booker for the last 10 years and was studying towards his CIPD, Level 5 and HRM Diploma to pursue his passion for training and HR management. Steve has been on a steep learning curve and has worked hard to achieve his qualification, while holding down the day job and learning a completely new role at the same time. Steve has worked hard to achieve his qualification and this determination has paid off as he is currently on secondment as Regional HR Manager, covering Bookers’ south west region.

Sue Winders developed a career in the butchery trade after leaving school and worked for a few independent butchers while also managing her own butchery shop. Sue was selected as of the chosen few to be nominated to complete the Institute of Meat Master Butcher Award. She took on the challenge and became the first female to achieve this award and graduated as Institute of Meat Accredited Master Butcher in February 2018.

Lindsay has been working at Booker for the past nine years and took on the running of Bookers’ Fresh Training Programmes in 2015. Since then her passion, enthusiasm and dedication has seen the programmes go from strength to strength. Living in Glasgow, Lindsay travels up and down the country, to ensure trainees receive the best possible training. Previously being qualified to deliver Food Safety L2, Lindsay this year has studied for and passed her L4 Food Safety exams, increasing her knowledge and ability to support the fresh training programmes even further.

Due to Helen’s hard word and tenacity, she has had several promotions since joining Booker and has added great value to each team she has worked in. Helen now works in the general ledger team, where she has taken on a number of challenges and has recently had yet another promotion to set up processes and procedures to deal with new accounting standard IFRS16 and also inter-company accounting processes. She is a great asset and is now completing further study towards achieving her ACCA.

Rob Anderson has had a great attitude and good customer focus since joining the team. Rob initially applied to undertake the Driver Academy training programme to become a van driver. Rob performed so well on this programme and in his new role as a van driver, he was nominated to also complete Level 2 of Driver Academy and complete his Class 2 Licence. Rob receives consistently positive feedback from customers and is a great member of the delivery team. He has recently been promoted to delivery supervisor.

Sarah Whiddett has been working at Bidfood for the past four years, starting out as an insight manager and was then swiftly promoted to Head of Insight & Customer Experience, and more recently as interim Head of Customer and Channel Marketing. Sarah completed a diploma achieving a distinction in 2 out of 3 modules. Sarah showed real commitment and drive to complete this qualification in such a tight timeframe and under challenging circumstances. Upon completion she swiftly took up a new role in the marketing team heading up channel and customer marketing.

Beth joined Bidfood in 2014 as a HR business partner and is currently completing an MBA. To date Beth has achieved distinctions in all modules of the first year, with one year remaining. Beth has also recently been promoted to Senior HR Business Partner in recognition of her contribution to the business and also based on her skills, knowledge and experience and fantastic stakeholder feedback.

Jim Mckeown has been working at Bidfood for the past two years. He was appointed Assistant SEM two years ago having been a nightshift warehouse operative. Since then he has undertaken an extensive programme of learning, achieving several qualifications. Some of these include Level 3 in Inspection and Auditing skills, Food Safety Train the trainer course and fire marshall training.

Satabdi became the first women to complete her training and get her licence on all JJ Foodservice equipment including a reach truck, pallet mover and forklift driver.

Michelle has been a long-standing and important member of the warehouse team since December 2005, and is now a trained forklift driver, having completed a formal Articulated Forklift truck driver course. She has also recently completed two formal First Aid courses.