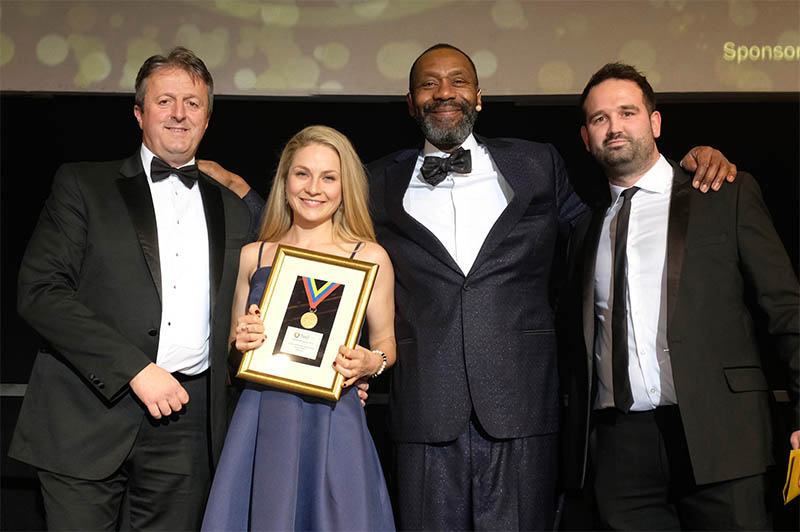 There’s no doubt that Katie Sillars’ heart belongs in Scotland. In fact, the 2018 winner of FWD’s Young Wholesaler of the Year at the Gold Medal Awards has made a career out of her love for all things Scottish.

With a passion for food and drink produced in her homeland, Sillars has made a big impression since joining Bidfood Scotland a little over two years ago to hone the foodservice wholesaler’s local ranges.

And while news of the 34-year-old’s impressive work spreads throughout the industry, she’s adamant that her bourgeoning career is destined to stay north of the border.

“I’ve been asked quite often about going down south, but I want to stay in Scotland,” she reveals to Wholesale News when we ask the million-dollar question about where her future could lie in the coming decades.

“I don’t have any set plan,” Sillars answers. “I know I want to work in Scotland, and continue in food and drink, and there’s lots of opportunities to do that in foodservice – I hope there’s enough scope for me to specialise in Scottish food and drink.

“If there’s anything I can do to make an actual impact, whether that’s at government or industry level, that’s where I’d like to get to in the future.”

It’s a bold ambition, but when you look at the esteemed company Sillars has joined by becoming the latest Young Wholesaler of the Year, it’s clear that she’s on the right track to achieving her goals.

A glance down the list of her achievements that led to the award only adds to that impression. After co-founding successful start-up company Eat Balanced, which focused on reinventing junk food into nutritionally balanced meals for children, Sillars made the jump to join Bidfood in September 2016 to look after its Scottish food and drink range.

Taking the role of retiring Scottish wholesale expert John Forteith, she had big shoes to fill, but soon set about fine tuning the products to be more suited to Bidfood’s other offerings. After rationalising the range, the results have followed, with a 600% growth in the Scottish dairy category alone.

Sillars wasn’t satisfied with stopping there though. She put her entrepreneurial spirit to good use by engaging with local suppliers to help further their businesses, starred in a video for the Scottish government to encourage more young people to consider a career in foodservice, and took a key role in Bidfood’s export project. “Bidfood is a fast-moving business,” she explains.

“We’ve got over 26,000 lines and there’s lots happening, and you can carve your own path in such a big company, which is what I’m doing. “I’ve been given a lot of autonomy and support from my boss, [General Manager] Jon Mack, and I work differently to everyone because I come from an entrepreneurial background, so being given the tools to go at it and develop something that’s a bit different is really great.”

The work resulted in Sillars picking up her award last November, becoming the second successive female winner of the prestigious title after Bidfood colleague Sarah Whiddett took the crown in 2017. For an industry that struggles with diversity, that’s a big statement.

And Sillars hopes she can use her success and new-found standing to join the drive to encourage more youngsters – and women – to pick a career in wholesale.

“It’s a great opportunity and I need to make sure I capitalise on it,” adds Sillars. “I want to promote wholesale as being a great industry and the fact that it’s a crucial element of the supply chain, and has a positive impact on the whole food and drink industry.

“There are lots of people who don’t know what wholesale is and think it’s just a cash-and-carry-type business – the dirty end of retail – and I want it to be seen as more forward thinking to attract more women to the industry while also bringing in the same talent as retail does.”