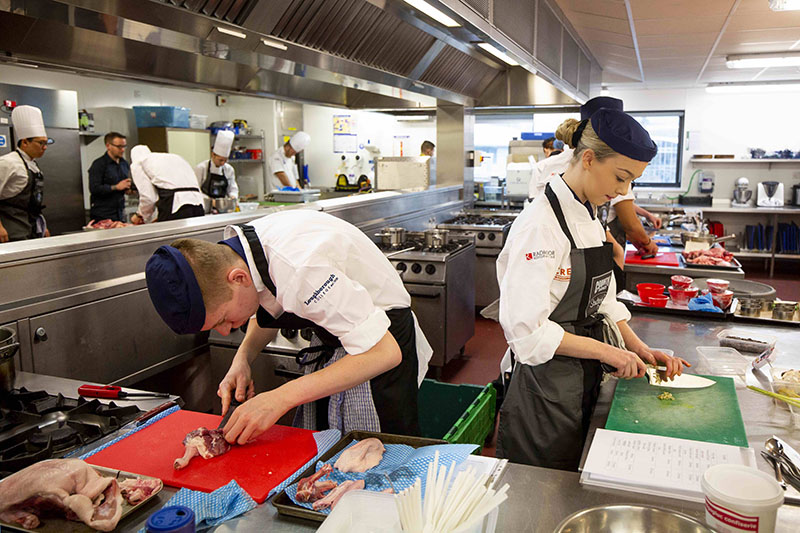 A wave of noise hits Wholesale News as we enter the busy kitchen. A cacophony of sizzles, splashes, bangs and chat fills the room, as four teams of junior chefs hunch over their workbenches rustling up a meal they hope will mark them out as the next big talent to hit the foodservice industry.

The focus and effort the college students are putting into their dishes are all in aid of Country Range’s Student Chef Challenge.

An annual competition held in association with the Craft Guild of Chefs for the past 25 years to test the mettle of catering students, the challenge is seen as a great entry into the world of professional kitchens. So it’s no surprise that the latest crop of young hopefuls are taking this year’s first semi-final at Loughborough College very seriously.

Although what is more unusual is that a wholesale buying group is willing to spend valuable resource and money on supporting and running the event, especially in a time of uncertainty in the sector.

But as Country Range’s Marketing Manager Emma Holden is quick to explain, the foodservice specialist sees supporting the annual challenge as an important investment in the future. Not just for the chefs competing, but also their own brand.

“Getting our brand in front of the future head chefs of the industry is key for us and our members, and is a big part of why we wanted to sponsor the competition in the first place,” Holden tells us.

“It’s more of a long-term thing. There are so many colleges that enter that will get to know who we are name-wise, but as far as direct sales, we’re not thinking short term about collecting new college customers. Our focus is on 10 or 20 years’ time.

“Of course, we’ve always got to prove what we’re doing and this is much more of an intangible, which is something we have to stress internally, but everyone is behind it from board level downwards.”

Holden forms one part of a three-person judging panel at today’s semi final. Although she freely admits that the real kitchen expertise comes in the form of her two Craft Guild of Chefs colleagues, who are scouring the kitchen during the 90-minute time to take notes on how teams are performing across a number of technical disciplines.

Instead, Holden’s expertise comes in leading the competition. Her role is to organise everything from start to finish, including branding, gathering entries and arranging the heats.

She also works with Country Range’s members to encourage them to recruit their local colleges to enter. And as the heat rises in the kitchen, those members are on hand to provide moral support.

“We look for any college that has a catering department,” explains Trevors Foodservice Key Account Manager Nikki Cope. “Taking part benefits the students to raise their profile, as well as the college’s, so it gets them used to being in competitions and pressured environments. It’s fantastic and is an example of the really good support Country Range offers its members.”

While the competition is celebrating its 25th edition this year, Country Range hasn’t been the sponsor for all that time. When it initially launched, fellow foodservice provider Brakes supported the event, although when they pulled out a few years ago, Country Range picked up the baton.

The Craft Guild of Chefs couldn’t run a full competition without a sponsor during the transition. The challenge either didn’t take place or, for one year, only a select number of colleges were picked to take part in a final based on paper entries. With Country Range’s support, there are two semis and more opportunities for chefs to get in the kitchen.

“The Craft Guild of Chefs thought it was a really important competition for them to have within the others they do,” Holden explains. “It’s a stepping stone towards the Young National Chef of the Year and how they can get in touch with a number of different colleges, and they felt there was a gap when they didn’t have it.

“The industry is really important to us – we love it and want to see it grow, and it will suffer if we don’t have the chefs coming through. There’s already a skills shortage.

“There’s some negativity about a career in hospitality or being a chef, and that’s something we want to challenge because by showing you can go to college, learn new skills and be in competitions like this, you can make professional connections that’ll mean students are more likely to get the jobs they want in the future. It’s a real investment in their career that they can follow into the industry, which we all need to make a sustainable future for ourselves.

“Previous entrants have gone on to bigger things, with one star going on to work for a Michelin star chef in London. But while the standard of the dishes coming out of today’s kitchen demonstrate this year’s talent, both Country Range and the Craft Guild of Chefs want it to grow even further. More colleges, more entries and more talent are all on the hit list.

“With the move this year to focusing on more practical skills, I’m really pleased,” Head Judge Chris Basten says. “It’s the kind of competition where I know it gets the students who do it ready for their final exam, especially from a skills point of view because they’ve got to be showing butchery and fishmongery skills. With other industries doubling down on their skills, you need to show you can do this sort of thing – if you don’t know the basics, you’re stuffed.”