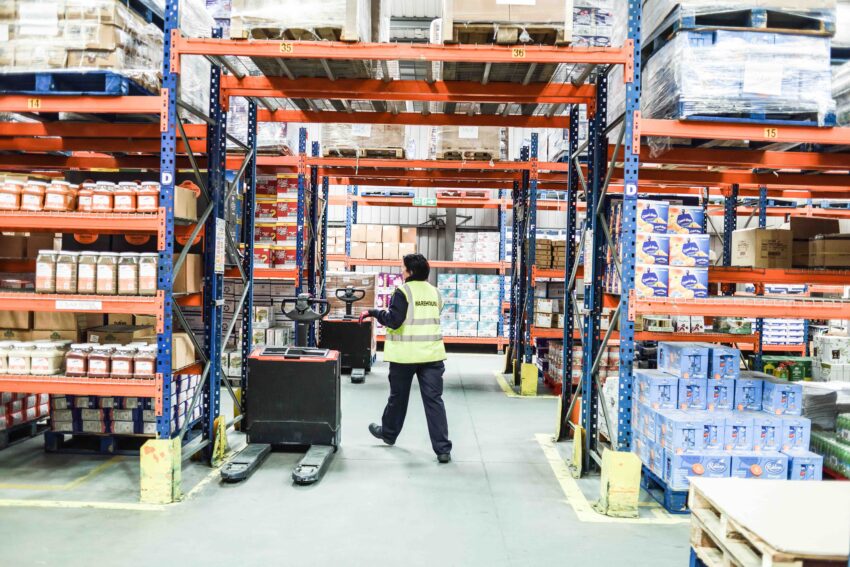 You won’t see a single scrap of paper in a JJ Foodservice depot. Since the beginning of 2018, the humble sheet has become contraband in the wholesaler’s 11 sites dotted around the nation. A banned material.

It might sound like a rule dreamed up by management to save resources without considering the logistical repurcussions, but it’s not. The paper ban is just one example of the forward-thinking innovation that has characterised JJ’s three decades of business. Paper has been replaced by technology.

All the warehouse operatives buzzing around the company’s headquarters in Enfield are armed with a device strapped to their wrist, linking to a system that holds all the information needed to fulfil a customer’s order without using a piece of paper.

“With all the technology back of house, we’re completely paperless in the warehouse now, which is pretty impressive,” beams Group General Manager Terry Larkin.

“Since January 2018, we’ve saved a lot of paper if you think every order was on paper and we get tens of thousands of orders. It [the wrist device] improves accuracy as well because there can be a lot of room for error with paper if you read it wrong.

“Now it’s push, push, job done – it’s so simple, it’s ridiculous. But somebody needed to program it to make it happen.”

The reductions aren’t just in the number of mistakes or environmental impact, though. Long-term business savings will be made by using less paper, cancelling out the up-front cost of installing the new system.

The foresight shown by JJ owner Mustafa Kiamil to back such ideas means this result  isn’t a one-off and Larkin puts that vision at the heart of what the business has achieved since he joined in 1995.

“I’ve been involved for 24 years and I’ve seen an awful lot of changes,” Larkin says. “I first started at our site in Tottenham Hale, which was, quite literally, a 30,000 square-foot-lock up. And it’s grown since then.

“Enfield was our first big site. It’s custom-built and when I saw it for the first time, I thought he [Kiamil] had gone mad – I thought ‘no way’. But the rest, as they say, is history and that’s why he’s the entrepreneur. He’s got fantastic vision.

“What is so good is that what he puts in place today is for tomorrow and he has wonderful insight. He knows if he spends £1million here, then he’ll get £3 million back over there, for example.

“He was ahead of the curve with technology, which led to us becoming the first wholesaler to have online ordering. We’re forever developing and evolving to make it as user-friendly as possible.”

JJ now has bases serving customers around several of England’s biggest cities, including Birmingham and Newcastle, and has continued to innovate. A factor that has seen the company receive a series of industry accolades down the years.

The latest development is an alert that lets customers know when a vehicle is dispatched for delivery and sends a five-minute notice period before it arrives so they can prepare to receive it. While that service is commonplace with several consumer-facing services, it’s novel within wholesale and sets JJ apart from most of its competitors.

With ease and convenience at the heart of everything the business does, JJ also launched its Mastercard to provide customers with up to £50,000 of credit and 56 days interest free on all purchases to help with cashflow.

As Wholesale News takes a tour around the expansive head office in Enfield, we’re also shown the workstream telematics system that provides drivers with more efficient delivery routes based on postcode, volume and weight – a scheme that has reduced carbon emissions by 3% in the past two years. These cost savings are passed on to customers as part of JJ’s transparent pricing promise.

“The bottom line is that it’s all about experience and we want to give our customers the best experience that’s out there. If we continue to have these points of difference, we’ll stay ahead of the curve,” explains Larkin.

The fresh thinking coursing through JJ’s business doesn’t stop with its customers. A campaign to encourage more women to apply for and take jobs in the warehouse also sets JJ apart.

At its peak, 18% of JJ’s warehouse staff were women and although that’s since dipped – largely due to the new recruits moving on to other roles elsewhere in the business – the power of being more inclusive has made a career in wholesale more appealing.

“We ran a recruitment campaign where we included more women in imagery and used wording such as flexible hours, childcare vouchers and family friendly, which is good for men as well as women,” Larkin tells us.

“We did a family friendly driver campaign as well to highlight there are no weekends and late nights, so it appeals to all parents, not just women.

“It’s interesting to know that since we’ve had ladies in the warehouse, it’s a better environment. There’s more balance, performance is great and the warehouse is a nicer place to be in.”

With so much going on in the here and now, it’s easy to assume that JJ is reaping the rewards from its proactivity. But there’s no sign of the momentum slowing, with Larkin revealing that plans are in place to add another site in the future – preferably serving West London – and a new freezer and chiller are being installed in Enfield to extend storage space.

One of the most exciting advancements within the JJ family is its investment in its partner company, FOODit, which offers JJ’s independent customers a service similar to Just Eat, only with the ability for businesses to amend prices, offers and products themselves. The belief is that FOODit could eventually make more money than JJ’s wholesale operation, although there’s no set time limit on that forecast.

“I’m not the owner, so I can only predict what the future holds, but I’d say it will always be service-led” Larkin adds.

“If you haven’t got good service at any level, customers will come and go in a blink, which makes the experience really important and technology will play a part in that I’m sure.”

If JJ’s history is anything to go by, a blend of the best technology and top service is almost guaranteed to form part of the business’s future.