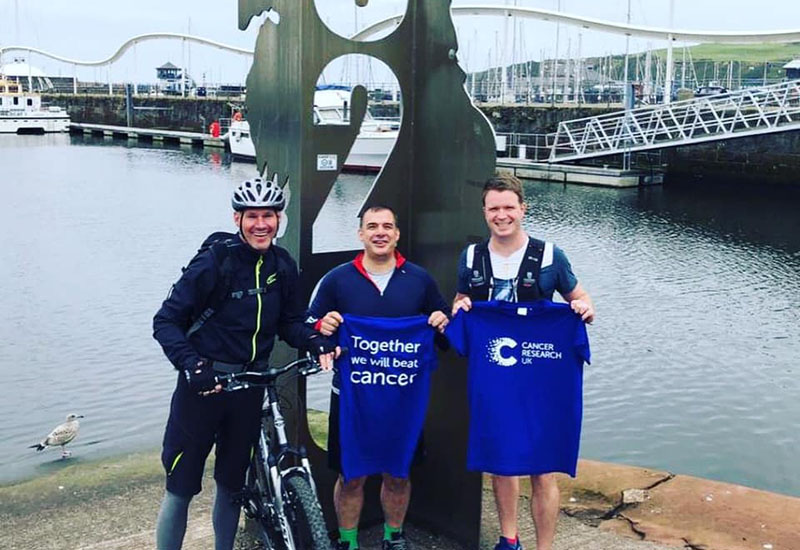 Lorcan Byrne of Caterite Foodservice has raised a staggering £7,435 for Cancer Research UK after running 61 hours and 120 miles to complete the challenging Coast to Coast.

Lorcan began his route in St Bees, Cumbria and finished in Tynemouth, Tyne & Wear, accompanied by Caterite colleagues Tarik Malik and Graham Fraser who cycled alongside him while providing him with navigational support and encouragement, and Lisa Ashworth-Whittaker, who drove a support vehicle with refreshments and emergency equipment.

Lorcan was inspired to tackle the Coast to Coast when friends and colleagues Helen Nattrass, Area Sales Manager for Caterite and Coral Rose, Managing Director, Country Range Group were diagnosed with cancer. Helen started treatment in January and has now returned to work cancer-free, while Coral, who was diagnosed in April, is still undergoing treatment.

“It’s been a difficult year with the news of Helen and Coral’s illnesses so I wanted to do something that pushed me to the limit to raise money for a fantastic cause,” said Lorcan Byrne. “It was pointed out by the Caterite team that I’m too short for swimming and cycling challenges so running the famous Coast to Coast seemed like the better option at the time. I don’t think I’ve ever pushed my body and mind so far but in all seriousness, it’s nothing compared to what cancer sufferers go through. We raised a significant amount of money so a huge thanks to everyone who supported me on the challenge.”