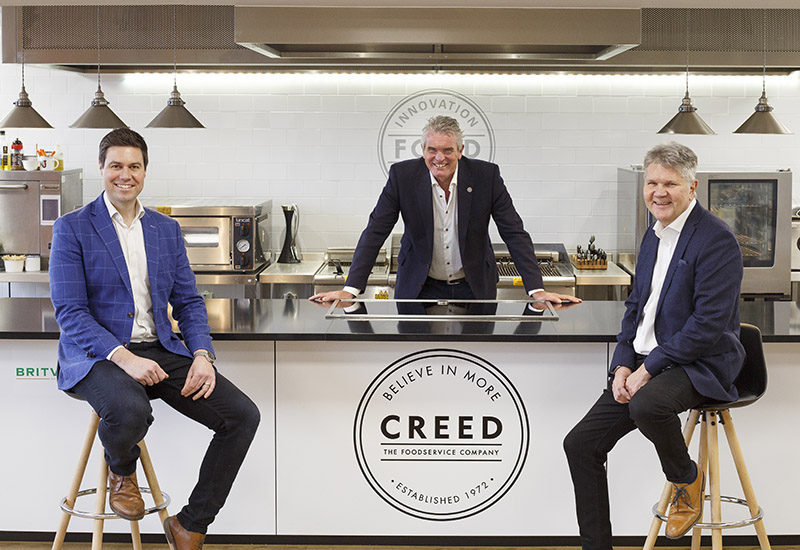 It’s the dead of night and a Creed Foodservice van is pulled up on the side of the road, waiting to make a delivery. Only at this time, there’s no customer there to receive it.

Even among London’s 24-hour hustle and bustle, there’s still an evident crossover when the last of the night owls enjoying the city’s lively social scene go home and the first of the early risers emerge to attack the day.

And tonight, Creed’s driver will witness it all from the cockpit of his vehicle. Staying on sentry duty until somebody arrives to allow him to complete his mission.

“It was the first time we’d done night drops in London and the driver was given the wrong key for this one drop,” recalls Chief Executive Chris Creed.

“He stayed there until the customer came in the morning so he could deliver the goods, then he got back to the depot. It’s that attitude we expect, that’s the Creed way of doing things. That’s what it’s all about.”

It might sound like the sort of yarn you’d read during a scroll on LinkedIn, but the story has come to epitomise the standards and care customers of the Country Range Group member have grown accustomed to.

This was no sort of common initiation to check on an employee’s dedication to the cause, though. It’s simply an indication of the philosophy that runs throughout the business’s operation.

And it’s an ethos that was key to Creed Foodservice seeing off the big boys of Bidfood and Brakes to be voted 2021’s top foodservice wholesaler at FWD’s Gold Medals at the end of last year.

“I think it’s about having the right culture and the right people driving that culture,” Creed says of the accolade. “You see some fantastic organisations who do great jobs, such as Timpson, which has a great culture throughout the whole organisation. That’s what we aim to have too.” 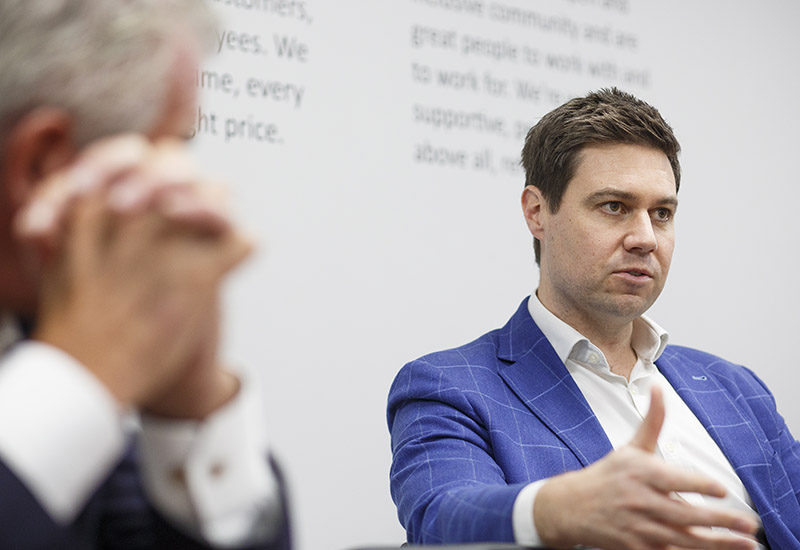 Throughout a visit of Creed Foodservice’s Food Innovation Centre in Cheltenham – of two sites in the Gloucestershire town, complementing depots in Ilkeston and High Wycombe – the importance of a positive culture is clear.

From the four company values emblazoned on the meeting room wall to the enthusiasm of the team welcoming Wholesale News, everything is pointed in the same direction.

“The strapline of our business is Believe in More and that’s a real common thread that goes across everything in the business,” explains Sales & Marketing Director Miles Roberts.

“Everyone is encouraged to do more than just the nuts and bolts, it’s about over-delivering on our customers’ expectations. What we really pride ourselves on is understanding what our customers want to achieve.

“We like to think we’re good listeners. We listen to what they want, take it back internally, make sure we’re aligned to that customer’s wants and act quickly on them.”

It’s easy to talk a good game, but realising that ideology isn’t always so simple. Although at Creed, so much emphasis is placed on the idea to create a true point of difference.

“All wholesalers have got the same boxes,” Managing Director Philip de Ternant picks up. “Whether it’s Heinz Tomato Ketchup or McCain Chips, we’ve all got the same stuff in our warehouse. So why does a chef want it from Creed as opposed to x, y or z?

“It’s about building that relationship up and developing it, building on trust, assisting them, guiding them and adding value. Most of all, it’s making sure our staff are part of their team.”

Last year’s FWD Gold Medal isn’t the only evidence that it’s working. Business is booming with a long string of consecutive years of growth only interrupted by the emergence of Covid-19 in 2020, with ambitions to exceed 2019’s figures in 2022.

Early 2020 had also seen Creed Foodservice named among the Sunday Times 100 Best Companies to Work For based on feedback gathered from employees in a confidential survey. It was a point of so much universal pride that Creed and de Ternant embarked on a three day tour to each department across the UK to thank them for their effort.

That joy was soon punctured, though, as the pandemic closed down a large swathe of Creed’s customers, replacing celebrations with tough decisions.

“The journey of the past 18 months has been emotional for us all,” de Ternant explains. “In the early days of the pandemic, we had to say goodbye to more than 100 people that we’d developed and trained and that had become part of our team. We’ve re-employed some of them since, but it was a difficult time.” 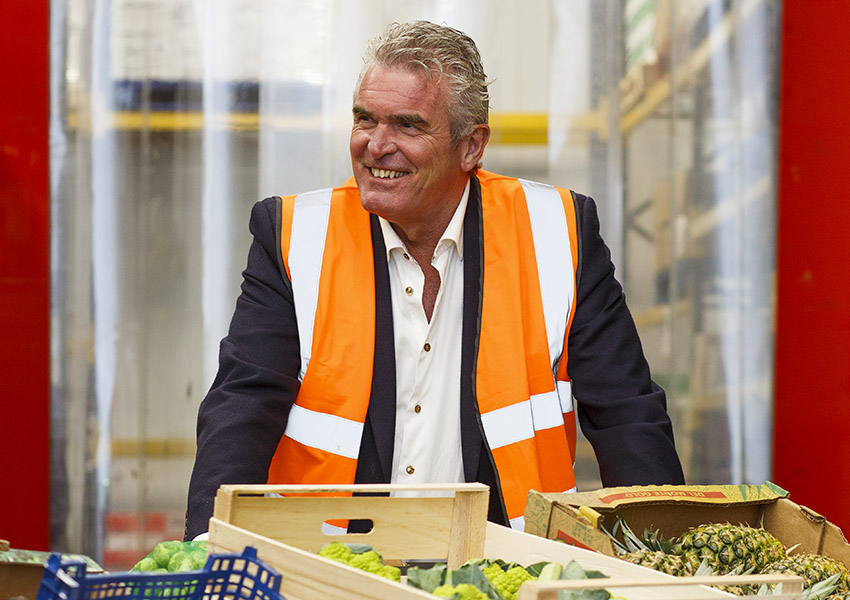 Old wisdom suggests that it’s in moments of adversity that a person’s true colours come to the fore. And it’s the same with businesses.

Instead of panicking, Creed acted decisively to get a secure footing and doubled down on its values. A new B2C service was launched within four days of lockdown, mental health support provided to employees, while daily updates were sent to teams to make sure they had the tools to convey accurate messages to customers and suppliers.

“We were open and honest with customers because they didn’t know what was happening in their businesses either,” de Ternant continues. “It was just making sure people were onboard and it was about working out how we could continue to serve the customers that were still open extremely well, as well as looking at other new business, such as care homes and schools, while they were open.

Roberts interjects: “I remember sitting in a board meeting and Chris [Creed] said we need to remember all our customers will be there at the end of this, so how we hold ourselves is important.

“One of the big parts of what we do is to be proactive and have honest conversations with customers and I think that’s all customers wanted in that period of time – an honest opinion of what we could and couldn’t do.”

An approach that’s as effective for new business as it is for retention, it seems. By challenging potential new customers to improve and creating an environment of lively, informal discussion, Creed Foodservice’s beliefs are on full show and help them stand out from the rest. It’s not one size fits all.

“I think it’s about the way we engage with people,” Creed says. “An example is there was a pub group up for tender last year and we did some work looking at their menus, looking at some different ideas.

“We were in the process with two or three other wholesalers, but the way we approached it was that rather than just sending pricing in, we sent in a menu concept as well as a tailored video that focused on their business.

“It’s about us saying, ‘let’s take it away from just talking about moving boxes or price, let’s sell you the dream of what food wholesale can look like’. We won the business and the relationship is really strong.” 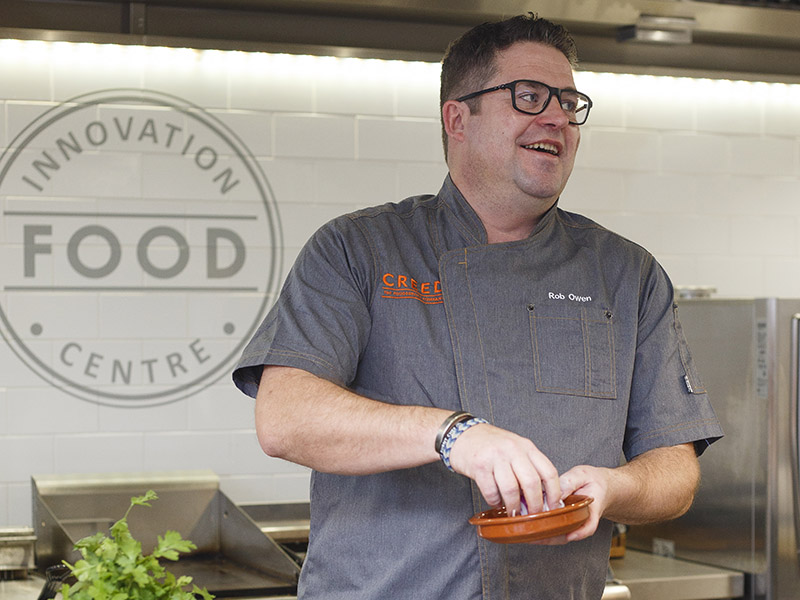 As Creed Foodservice enters its 50th year in 2022, there’s no sign of the wholesaler standing still. And it’s backed up by a desire to do business their own way.

“We’ve got wheels and warehousing, like every wholesaler, but we spend only a little bit of time talking about that,” adds Creed.

“We’ve always tried to do things differently. Not for the sake of being different but because we can do things better in a slightly different way. It’s who we are.”

It’s a culture that’s evident in every way.