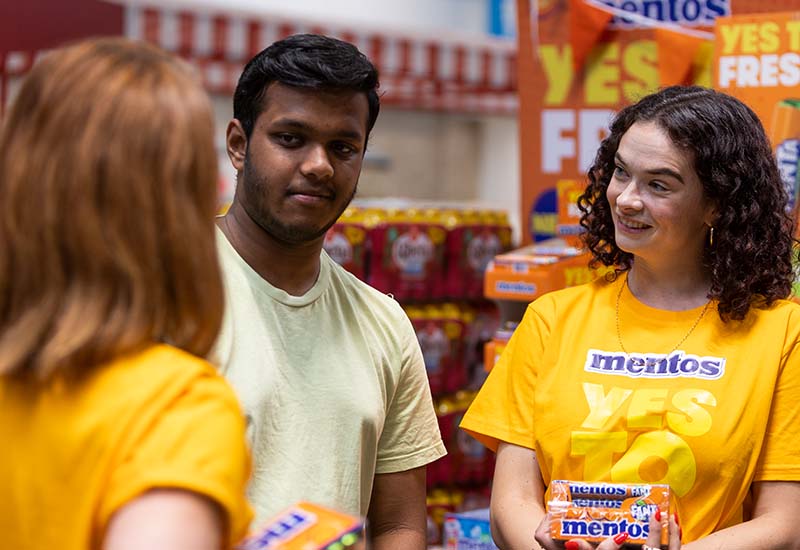 The names Mentos and Fanta are convenience staples for most independent retailers, so the two brands combining is expected to be a hit this summer as the new Mentos Fanta launches.

It’s the first time Perfetti Van Melle’s popular Mentos range has partnered with another brand in this way, so it represents a significant arrival for the sugar snacking category.

To celebrate the rollout of the NPD, Perfetti Van Melle hosted a promotional day at Bestway’s Abbey Road depot in Park Royal to showcase the product and let retailers have a taste of the flavour that’s expected to get shoppers excited. And Wholesale News was there to see it for ourselves.

“We’re expecting great things and the feedback we’ve had so far from the samples is that they really taste like Fanta Orange,” says Jon Thurston, Perfetti Van Melle Senior National Account Manager.

“Fanta is a strong brand for Coca-Cola [Europacific Partners], so to partner that with Mentos is really positive and we’re expecting it to do well now and in the weeks to follow.”

As well as partnering two big brands with each other, the Mentos Fanta launch also taps into the orange flavour boom that’s currently taking convenience by storm – further extending the appeal of the Mentos range to grab consumers.

“The customers appreciate variety,” Thurston adds. “The mint and regular fruit flavours in Mentos do particularly well for us and are our two bestsellers, so adding variety gives customers and consumers extra interest to try and raises awareness of the brand.”

Find out what the retailers had to say about Mentos Fanta in our video below.

For more on the Mentos Fanta launch, check out August’s edition of Wholesale News.