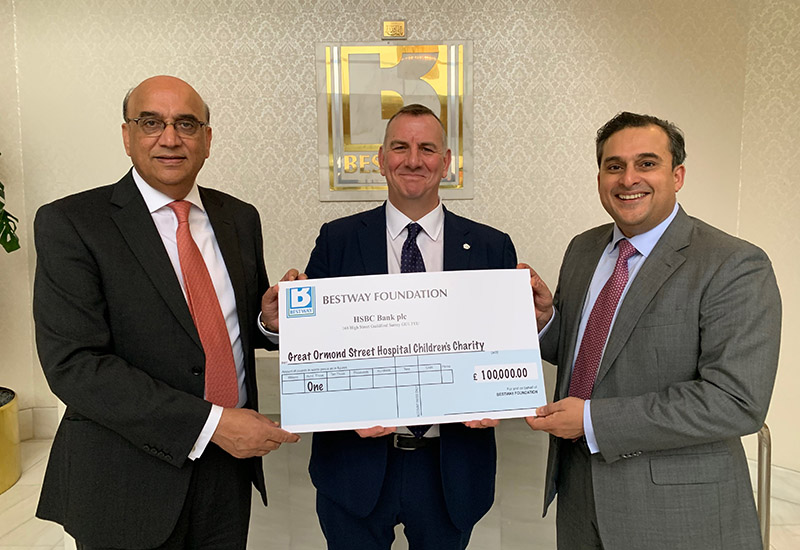 Great Ormond Street Hospital Children’s Charity was presented with a cheque for £100,000 by the Bestway Foundation UK.

The Bestway Foundation UK was established by Sir Anwar Pervez in 1987 and since then the Bestway Group has donated more than £14.8M. Each year the company hosts its charity race day at Royal Ascot which is attended by suppliers, Bestway employees, trade press and members of the benefiting charity.

For 2018, the chosen charity was Great Ormond Street Hospital Children’s Charity, which raises vital funds to support the hospital and the 618 children and young people who arrive at GOSH from across the UK every day. For more than 160 years the hospital has provided best-in-class care and pioneered new treatments and cures for childhood illnesses. The charity seeks to raise funds for the hospital so that it can stay at the forefront of developing new and better ways to treat childhood diseases and pioneering numerous breakthroughs in paediatric care.

Tim Johnson, Chief Executive of GOSH Charity commented: “I would like to thank the Bestway Foundation for their generous donation, which will help us to support the seriously ill children and young people from across the UK who are cared for at the hospital. We are very grateful for the Bestway Foundation’s ongoing support.”

Zameer Choudrey CBE SI Pk, Chief Executive of Bestway Group, added: “We are delighted to support the work of Great Ormond Street Hospital for the second time. The hospital and its staff are doing a wonderful job in treating seriously ill children and providing them and their families a better future.”