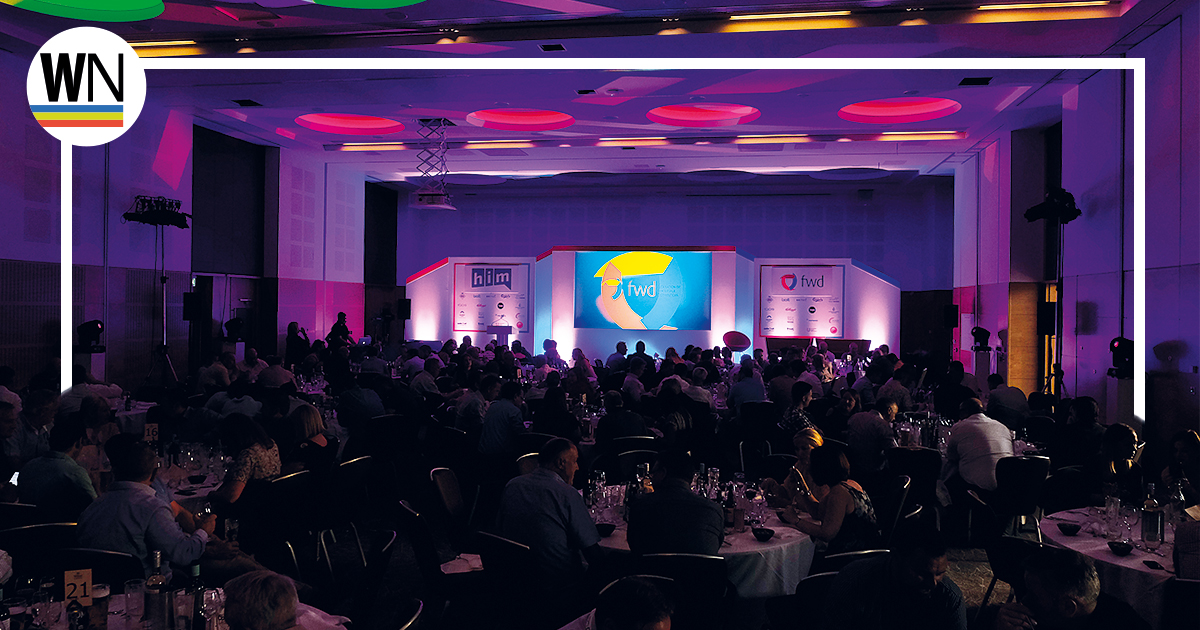 As it happened: FWD’s Next Generation Conference

As the wholesale sector’s senior figures come together for FWD’s annual conference, Wholesale News is covering all the big talking points right here throughout the day. Just refresh your screen at regular intervals and you’ll be furnished with everything that’s been said about the next generation so you don’t miss out by not being there.

While you’re enjoying what’s going on at the conference, why not check out our companion edition online for free? And if you like what you see, don’t forget to subscribe to Wholesale News or give us a follow on Twitter or LinkedIn.

And that’s it from us. A big thank you to everybody who has tuned into today’s blog. Don’t forget to read even more coverage from the conference in July’s edition of Wholesale News.

And that’s it! Darren Goldney and Andrew Selley discuss the themes on stage, and are joined by Debbie Harrison and Yulia Goodwin from Sugro. They discuss the different aspects of their businesses and how it translates to the day’s themes. Harrison talks about how people don’t go to university to get into wholesale and learning on the job is important, but the new starters of today will be the leaders of tomorrow, so they should be embraced.

James Bielby invites FWD Chairman Andrew Selley to the stage to discuss what FWD does. Selley talks about the value that FWD has and how the structure allows them to give really good coverage. Brexit inevitably comes up but Selley disregards it as “background noise” while it goes on, but admits it’s difficult to know what’s going to happen and it’s about reacting them when they happen. Selley and Bidfood (who he’s Chief Executive for) advises that they’ll be preparing for the latest deadline of 31 October, but won’t be stockpiling anywhere near as much as previously due to not knowing what’s going to happen.

Despite that uncertainty, Selley believes that the talent won’t dry up in the industry and that’s only going to increase with more diversity, just as they do at Bidfood. The challenge is to maintain the engagement with the best employees to make sure they want to follow the trend of their predecessors who have remained in the industry throughout their careers.

The conference is on its home straight and Unitas Managing Director Darren Goldney is kicking off the final session. Similar to Charles Wilson earlier, Goldney starts by looking at how the sector has changed in recent years and the number of truly independent wholesalers have significantly reduced – not least by Landmark and Today’s Group merging to create Unitas Wholesale last year.

For Goldney, the example of what Unitas is doing to achieve that is worth casting an eye at. And everything they’re doing is based on a simple calculation: efficiency and effectiveness equals excellence. But more than that, it’s important for wholesalers to be a highly valued partner that gives some return on efficiency.

We’re heading to the last of the talks for technology and talent for the next generation, and a key figure in that over the 2020s is Salih Sheikh, Bestway’s Head of Marketing and Digital. Salih is only 30, but has already made a big impact at Bestway and he begins to talk through that. But while the strategy may seem simple, not many other wholesalers are getting it quite right.

The backbone of everything Bestway has been doing since Sheikh has taken over marketing and digital, has been to focus on convenience. That means making it easier for customers to get what they need online, just as you would in depot – whether that’s providing the right product information, ensuring a good flow of products, improving search ability or adding extra value, such as giving customers the chance to design their own POS that isn’t printable from the website. In fact, Sheikh summarises that maybe doing everything together might be the golden bullet.

But as it looks as though he’s saying the future is all digital, there’s a reminder that the depot isn’t dead, it’s just evolving and the two channels should work together to get it right. With more customers using Bestway’s e-commerce channels for a big shop, but the depot for top-up shops, Sheikh suggests that depots may be best placed as smaller spaces that’s pushing faster-selling lines.

Next up is Richard Fletcher from Foodservice Online who gives us a pretty extensive rundown of Amazon and what it stands for. Amazon has been identified as the biggest threat to the wholesale market, but he argues that they’re not necessarily a bad thing and the industry should be taking note of what they do well instead. Fletcher says that modern loyalty is the driver to Amazon’s success, with infinite choice, instant self-service, information ubiquity ruling the roost.

To sign off, Fletcher makes a bold statement about wholesale’s future: “Wholesalers don’t need warehouses to grow their businesses, they don’t need to invest in stock, they don’t need bigger fleets to do this. They need technology, platforms and interconnectivity.”

We’ve just heard from HIM and MCA Insight Managing Director Jill Livesey, who discusses the trends that will be leading the convenience sector across the next decade. She gives a wider view of consumers and what is triggering their interest, from the media attention that’s caused a clamour for less plastic usage and how lifestyles are causing us to rely on convenience more and more.

She admits that predicting the future is difficult and says that MCA’s latest report identified that pub market growth is outperforming eating out by nearly 2% – which is something nobody saw coming a few years ago.

We’re back from lunch and ready for another helping of wholesale chat this afternoon. The session will also be punctuated by footage captured from FWD’s young wholesalers roundtable, which was hosted by Red Bull earlier this month. The group is talking about several big issues and their opinions on them, so they’re about to give a different viewpoint on some of the topics we’re all well versed in. For those of you not at today’s event – and those who are and want to hear more – will be able to read a three-page feature from the roundtable event in July’s Wholesale News. Not a subscriber? Then you should subscribe now.

After a fascinating morning, it’s time for lunch. Expect plenty of gratuitous food shots for the next hour. 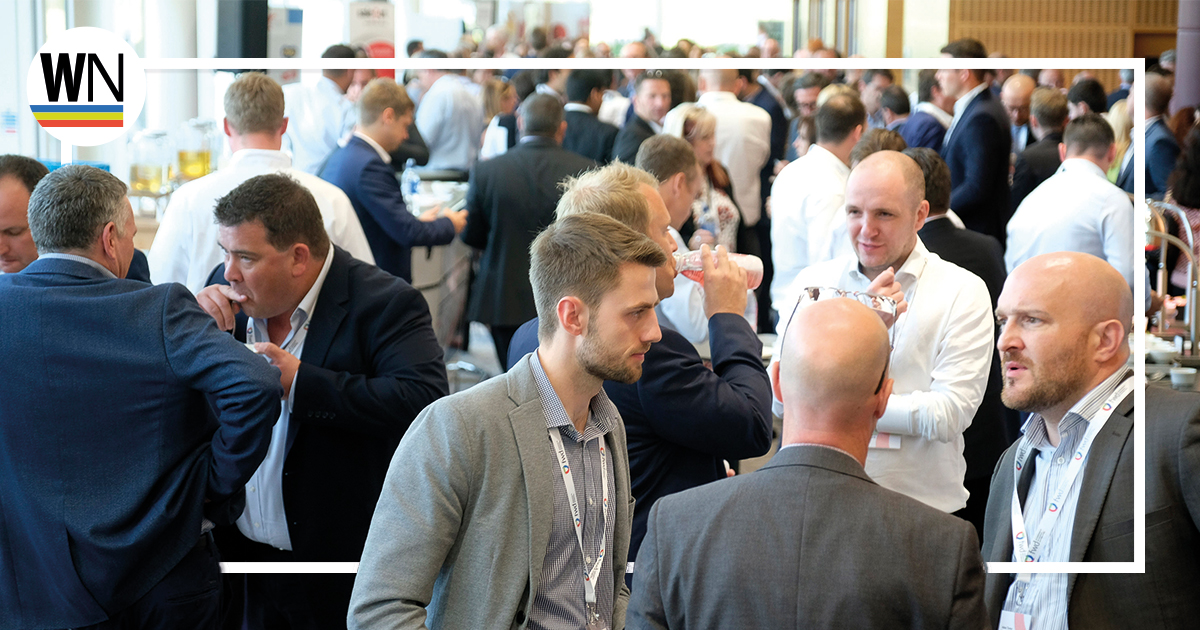 The first panel discussion of the day is under way, with James Bielby chairing. The first question goes to Katherine Morgan of Interel Group and she says that it’s looking more likely than ever that the UK will leave the EU without a deal on 31 October – and says that her contacts in parliament have opposing beliefs of what will happen to industry as a result. And while DCS Group’s Michael Lorimer points out that nobody really knows what the real impact will be, wholesalers should prepare as best they can for all eventualities.

Fiona Speakman adds to this by saying the big knock-on effect will be consumer confidence and the ability for operators to hire staff if immigration numbers continue to drop. Despite that, CGA’s figures appear to show that consumers are still going out and spending to eat. The voice of warning comes from economist Martin-Fagg, who says a hard Brexit will create a perfect storm of output falling and prices rising, leaving the Bank of England with a dilemma of which one to react to.

As the morning session continues, Booker’s Charles Wilson takes to the stage to discuss if bigger is better following the wholesale giant’s merger with Tesco. He points out that of the 30 biggest players in the sector 10 years ago, a third no longer exist, highlighting the need to adapt to trends. Wilson takes some questions from the audience and backs the value of cash and carries in the future, and how they will change to have even greater value in the future for built-up areas. 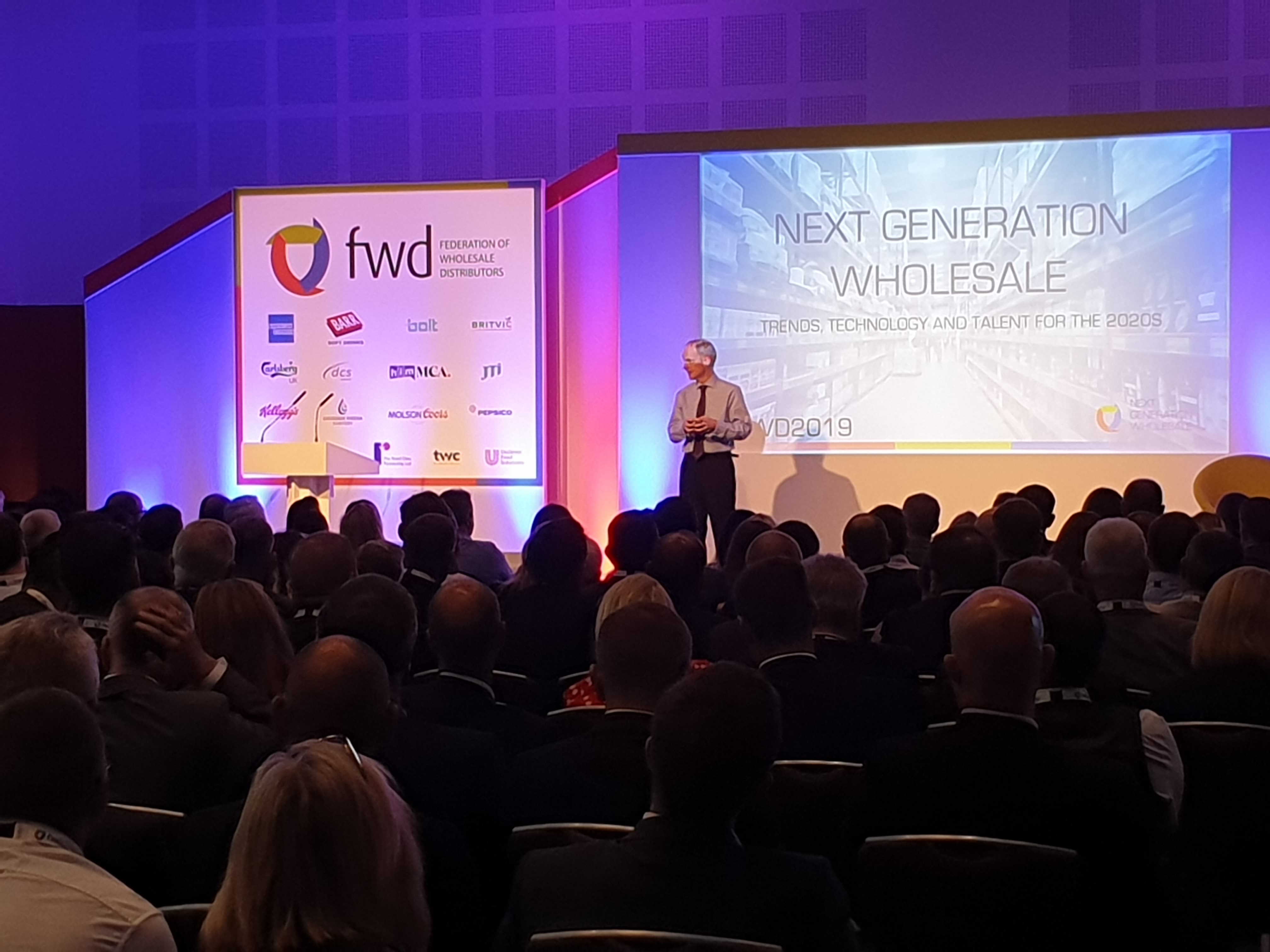 CGA’s Fiona Speakman takes to the stage to discuss a study commissioned by FWD. There’s a lot of really fascinating insight in the study (check out the next issue of Wholesale News for some of these). In essence, the survey has identified a series of areas that wholesalers, suppliers and operators need to be aware of.

Speakman’s key take outs are that performance is still positive, but tempered by food-led businesses starting to feel less optimistic, while Brexit is sure to impact the industry in several ways, including staffing as EU immigration reduces. A key to getting that right appears to be people and experience, which are interlinked – investing in people will drive better experience and is core to all consumer growth. Technology is also important, but needs to be implemented properly and more quickly, while the consumer desire for health and sustainability is only going to get larger. Plenty of food for thought.

Next up is behavioural economist Roger Martin-Fagg. He sets about debunking a few myths about the economy and explains what encourages peaks and troughs for spending and cashflow. Martin-Fagg points to the way money supply has decreased in recent times, but the UK hasn’t truly felt the full impact of that yet. Instead, he predicts that next year will be softer in terms of economic growth due to a drop in money supply to 2% growth.

The threat of Brexit means that a mini recession is possible if we leave without a deal, mainly due to supply chain issues. But while Martin-Fagg seems to say staying or leaving with a deal will be better for the economy, he says that wholesalers have three things they can control during the uncertainty: be clear on which customers they want, make sure you’re distinctive to them and be compelling so they want to work with you.

And we’re off! FWD Chief Executive James Bielby enters the stage to introduce the conference. He’s discussing what FWD has achieved in the past 12 months and has a special announcement to make: the federation has paired with convenience retail trade association ACS to launch its Dignity at Work Charter.

The charter is a positive statement of high behaviour standards companies can include in their own company policies and businesses will be invited to sign up to. You can read up on everything the charter entails in the full story.

The foyer at Hilton St George’s Park is filling up as the great and good of wholesale gather ahead of the conference. There’s a lot of chatter as everyone discusses what’s in store for the day. The conference itself kicks off at 10.45, so there’s plenty of time for a bit more talk before the real action gets underway.

If all this talk (and pictures of people drinking copious amounts of coffee) is getting you in the mood, then you can fill your time by reading what  the conference’s sponsors had to say when we quizzed them about their thoughts on what the next generation of wholesale has in store. 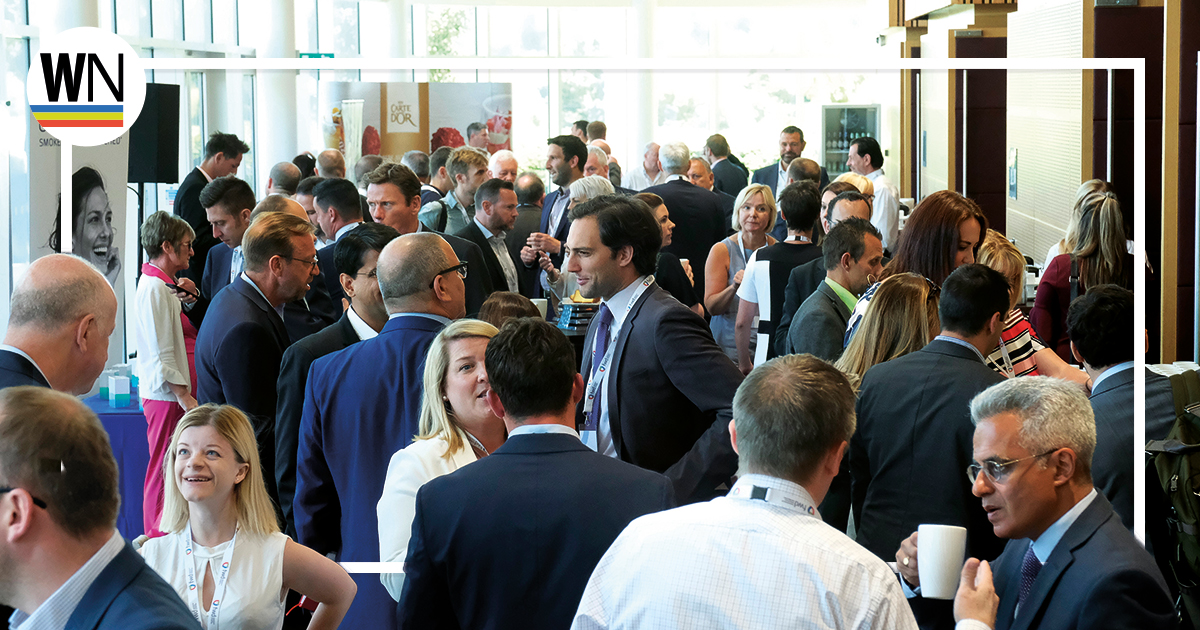 Are you ready to talk wholesale? Then you’re in the right place. Or at least we are. Today is FWD’s annual wholesale industry conference and this year’s theme is the next generation – focusing on tomorrow’s talent, trends and technology and what businesses within the sector should do get it right.

So, that’s why more than 300 of the sector’s top names are congregating at the FA’s St George’s Park headquarters in Burton-upon-Trent for a day discussing all the key issues. We’ll be hearing from the likes of FWD’s James Bielby and Andrew Selley, Booker CEO Charles Wilson and economist Roger Martin-Fagg, as well as senior members from Unitas, Bestway, Sugro and Pricecheck.

If you aren’t able to be there today, you can keep up with all the big talking points right here, as we’ll be updating this blog throughout the day. Stay tuned!