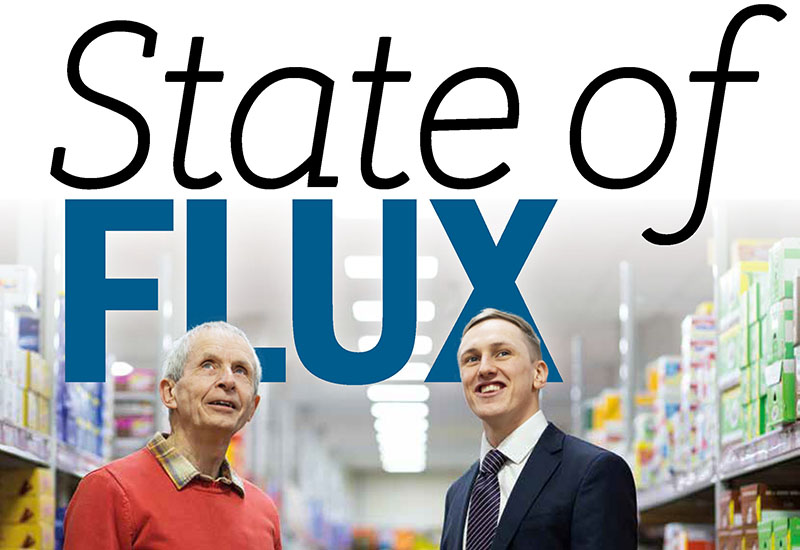 Howard Graham’s  first day was on April Fool’s Day 1970, but the job was no 12-hour prank for him. It was the start of a journey that was more than a casual dalliance for the senior buyer.

Almost half a century on and the 65-year-old (pictured above left) was turning up for his final day working at Dee Bee Wholesale. And while his role – and place of work – has changed across the 50 years’ service for the Ramsden family business, Graham’s memories of his early days are as vivid as ever.

The long-server, who retired in January, represents the transformation the Grimsby-based company has undergone, from town-centre retailer to wholesaler. The wholesale arm of the business started in 1961 and was based 300 yards away from the main store,” Graham recalls.

“They supplied the bingo trade on the coast back then, which is where it all started. I was at the store until 1979 before moving to the cash and carry, where I became a buyer after about a year.

“I’ve seen a lot of change in that time.  When I was first at Ramsdens [the retail arm], the canned goods business was huge. The number of cans that used to come in was unbelievable, but we moved into frozen foods in the 70s and then on to chilled – now it’s all about food to go as well.

“Back in the 70s, the only food to go was fish and chip shops; there weren’t many Chinese or Indian takeaways back then.”

Now, bidding farewell to the cash and carry that has become his second home over the past 50 years, Graham speaks knowledgeably about the trends that have come and gone during that time.

When the wholesale business first moved to its current site – where it later separated from the retail brand to become Dee Bee Wholesale – the majority of its stock was non-food, although that soon changed when the opportunity to stock groceries became clear.

That wasn’t the only difference to operations though. With shopping habits changing too, the fluctuating popularity of delivery has seen the business swing one way and to the other over the decades.

A significant 80% of Dee Bee’s present-day business is now delivered, with a fleet of 16 vehicles carrying out deliveries from the wholesaler’s two bases in Grimsby and Hull. While the majority of this is within a 30-mile radius of the east coast sites, the Unitas member also supplies clusters of Today’s retailers as far south as Northampton and across into the north-west. 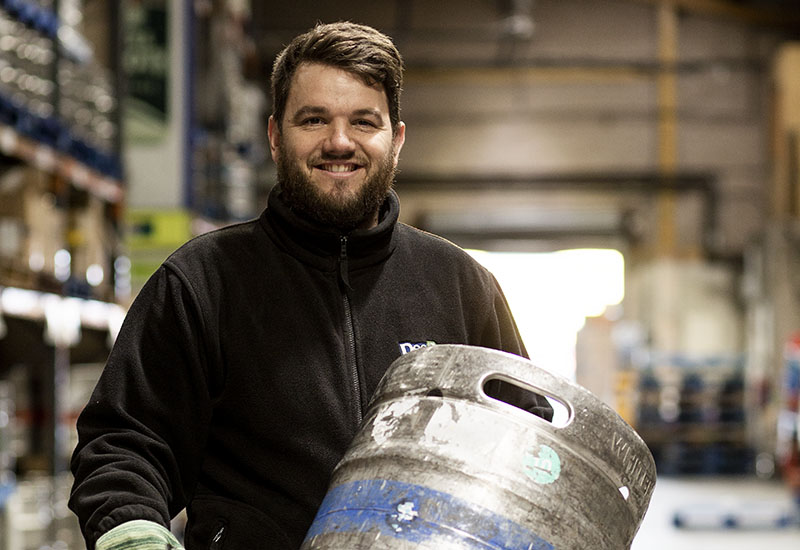 It’s a far cry from when Dee Bee regularly welcomed fishermen from the thriving trawler businesses operating out of Grimsby’s docks – although two customers with nautical interests remain on the books.

Another man with a knowledge that spans the business’s history is Managing Director Nick Ramsden, who is the third generation of the Ramsden family to take the reins. But while Ramsden is familiar with tales from the past, it’s the future he needs to focus on now.

Not surprising when you consider the amount of changes over the decades, the industry is in a constant state of flux and shows no signs of slowing. For Dee Bee, the latest squeezes include finding ways to accommodate National Minimum Wage hikes, keeping up with the digital age and ensuring a healthy customer base as independent retailers continue to swim against the tide of the multiples.

“The retail sector is really challenging,” Ramsden explains. “The mults are buying the bigger sites, discounters are bombing ahead and if you’re an independent retailer where a Lidl or Aldi opens, it kills your business.

“I don’t know the longevity of independent retail. I’d like to think it’ll be around in 20 years’ time because it’s been our lifeblood for three decades, but I don’t know. We’ve been buying stores to create our loyalty as it isn’t there anymore and retailers are having to look around. These guys can get all the websites and prices on their phones in a way they couldn’t 10 years ago; they can shop around.

“So, for us, it’s about trying to control the loyalty by buying stores. We have three but have offers in for others. I’d like to think that by the end of the year we’ll have 8 to 10 convenience stores under the Today’s brand.”

There’s no guarantee of success either. Ramsden lists off all the competition in the area, with Spar, Londis, Costcutter and Asda just a few that rush quickly to the front of his mind.

But while Ramsden has identified one way he believes will safeguard against current trends, Dee Bee isn’t stopping there. The business offers a growing on-trade business – which includes a foodservice offering – and is establishing several points of difference, such as an array of beer kegs and a range of own-label, on-trade wines through a partnership with the Society of Vintners.

Moving completely away from the cash-and-carry model in the next decade is also a big consideration. Despite reopening a former site in Hull four years ago, there has been no clear increase in the percentage share of business in people visiting the depot, with the number steadying at 20%.

“We’re still profitable in the cash and carries, but in 5 to 10 years we might have to make the decision to start dark-store distribution unless the market changes in that time,” Ramsden considers.

“Our cash and carries are set to be picked from but also for customers visiting. The big thing we need to consider if we change to completely delivered is if we end up picking for customers who would come into cash and carry anyway, which wouldn’t make sense.” 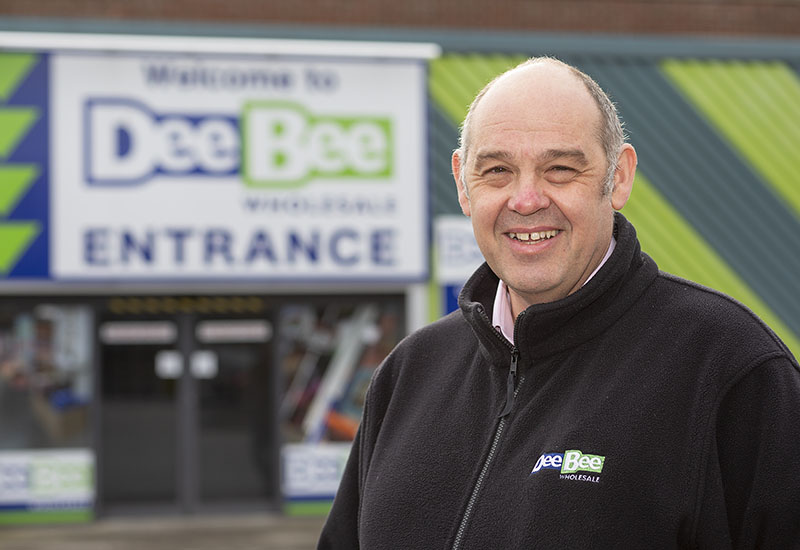 One area that Dee Bee is earning a strong reputation for is its growth in digital. Despite its relative smaller size compared to some of the sector’s bigger hitters, the Unitas member is innovating to make sure its website is pushing the envelope for e-commerce.

This is aided by in-house digital experts who pitch in alongside their day jobs to come up with new ideas and implement changes without the need for using an external agency.

“We’re evolving the site all the time,” says Trading Director Andy Morrison (above), who oversees the digital project.

“Things like a floating search bar make searches as easy as possible, all advertising is linked to the product and we’ve recently added something called Chosen For You. That means that if customers search for a product, they will also get pushed something related they can buy at that point that’s likely to be of interest to them.

“The challenge is getting every supplier to focus on digital [in this channel]. There hasn’t always been a digital contact at some suppliers, even the big ones, but they’re now investing in this area and starting to use us as a test bed. We’ve had some good support on the back of that.

“A good example of what we’ve done is how we drove the model for age verification with [vaping company] Juul. Now, if a retailer clicks on the product, it takes them to a separate age verification page first that a user has to digitally sign to say they’ve signed up to Challenge 25. Juul has then taken that out to others too. Considering our size, we’re punching way above our weight,” concludes Morrison.

That sort of approach would have seemed alien to the retiring Graham when he started out working with just a humble pencil, rubber and a notepad. The long-server has learned as technology and processes have developed and he continued to be an important resource when it came to marrying up traditional and new methods until his final day, by training up Graduate Trainee Lewis Dyson in the 18 months prior to his departure. By imparting that wisdom, Dee Bee has ensured it continues to borrow from old and new as it moves forward.

“When I started on that first day at Ramsdens 50 years ago, I’d never have thought the company would have got to the size it has done,” Graham adds.

“It’s a great story for a family business that’s gone all this time. The secret has been developing and moving on over the years. As soon as you fall behind you’re dead and that’s the danger for businesses – and we’ve never done that here.”

It’s a message that Dee Bee knows is no laughing matter.