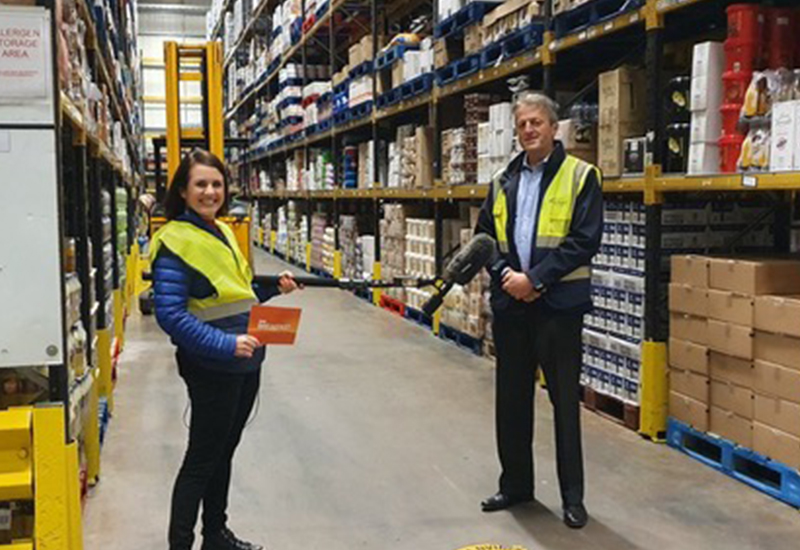 FWD wholesalers have taken to the airwaves in recent days to call for business rates relief for the hospitality supply chain. Members appeared on BBC Breakfast, ITV News and BBC World, with radio coverage on Radio 4’s Today Programme and Five Live.

As the government prepares to announce the latest restrictions on pubs and restaurants, the wholesalers demonstrated the devastating impact that closing their customers for a second time would have on their businesses.

Bidfood’s Andrew Selley was interviewed at the company’s Cannock distribution centre for BBC Breakfast. He said: “The complexity of the supply chain that supports hospitality, healthcare and education is vast, and you can’t just turn these things on and off. You need to have some understanding of what’s coming down the track in the next weeks and months.

“We’ve got deliveries out on the road today to all parts of the country, to restaurants, hotels, schools, hospitals, some of whom will get news in the announcements that will impact on whether they actually want to receive those deliveries.

FWD Chairman and Country Range Group MD Coral Rose told Radio 4 listeners that the restrictions were a devastating blow for food wholesalers. “We rely on hospitality, it’s the largest share of our turnover, but even though those businesses were given grants and business rates relief, wholesale specifically has been given no support. We have 21,000 care homes and 1600 hospitals, with hundreds of thousands of residents and patients, and we can’t continue to deliver vital food to these organisations throughout the UK.

“We haven’t had any support, but we’ve been left with lots of stock that we can’t move on and will have to pay for, and we’re not going to get our bills paid either.”

Andrew Wilds of Wilds of Oldham made a passionate appearance on ITV News to call for support. “It’s a bitter blow for this company. Everyone’s worried. It’s another nail in the coffin. It’s worry, worry, worry really,” he said.

Richard Strongman of Harvest Fine Foods was filmed at his Hampshire depot for BBC One and BBC World. ‘We’ve had to make some redundancies, unfortunately, because of the uncertainty around the opening and closing of hospitality,” he said.

“This year is looks like Christmas parties aren’t going to happen at all, and a lot of operators are scratching their heads and wondering how they are going to make this work. This will be the first year I’ve run my business at a loss. It feels like not only are the goalposts moving, the playing field is moving on an almost daily basis and it’s really hard to plan ahead.”

On the same programme Coral Rose added: “We’ve already had customers in the north of England reject deliveries over the prospect of local lockdowns, so we have fresh produce that’s going to have to be thrown away.”

Andrew Selley told Five Live’s Wake Up To Money: “Across the wholesale sector, we are supplying schools, universities hospitals, care homes, hospices and prisons, and [these restrictions] have a knock-on for the supply chain which the government don’t seem to have considered. We can’t close – 30% of what we do is supply vital public services. That will never cease, but obviously it becomes far less economic and in fact loss making to run your whole business to supply 30% of what you’re used to.

Meanwhile the Sunday Express covered the story under the headline Schools and Care Homes face Food Shortages – Wholesalers’ Dire Warning. It quoted Coral Rose as saying, “we have been asking for months for parity with retailers who have had rates and blanket help. Many food service wholesalers, often family-run independents not giants like in retail and widely dispersed, are fighting for their lives which could mean Christmas without the trimmings.

“Each wholesaler serves a particular market and is deliberately chosen by the customer. Eighty per cent of the UK’s 21,000 care homes operate like this, for example choosing food that is easy for their residents to swallow.

“If the supplier closes they are left at the back of a growing queue, scrabbling to find another further away. Wholesalers may be invisible, but we are the wheels, without us regular supplies cannot be counted on.”

Support for the wholesaler’s campaign came from Adam Leyland, the influential editor of The Grocer magazine. In his first-page column he wrote “It’s an absolute scandal that the Chancellor has thrown foodservice wholesalers under the bus with his failure to offer business rates relief.”

Unitas Wholesale’s Darren Goldney aimed his fire at the multiple retailers who have received both business rates relief and a sales increase at the expense of the hospitality businesses that were forced to shut. “We need the government and those who have ‘windfall’ benefit from this crisis to do the right thing,“ he told Wholesale News. “Taxpayers’ money is finite. The money is in the wrong place and wholesale is able to laser target it to those in the supply chain who support outlets that our population rely on.”