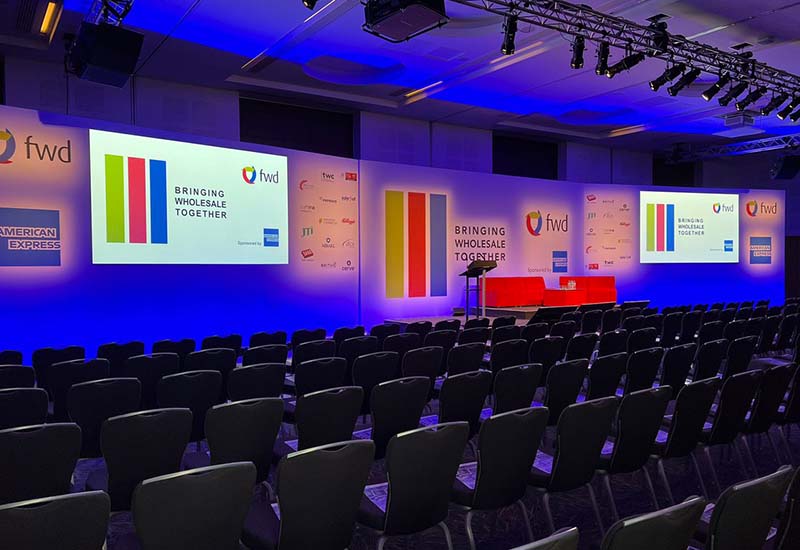 FWD conference back with a bang after two years

“It’s good to be back” – that was James Bielby’s resounding message as he welcomed more than 300 wholesalers and suppliers for the first FWD conference since 2019.

The federation’s Chief Executive was the first of a long line of speakers who recognised how much the wholesale sector has changed since the last time the sector got together at St George’s Park more than two years ago, with the Covid-19 pandemic and current distribution crisis putting the supply chain under immense pressure.

And while there are several other issues – including health legislation, sustainability and crime – are only going to add to this, this wasn’t an occasion to simply lick the wounds of the past 20 months. There was optimism too and a lot of talk about how the role of digital is becoming increasingly important for the wholesalers making the biggest gains in the market.

Turner Price’s Marketplace was a particular star, being referenced on a couple of occasions for their innovative approach to growth. Sessions from Lumina Intelligence and Mirakl delved even deeper, checking out the numbers and trends that are being seen to provide valuable insight for where the industry’s investment should be focused.

But money is in short supply, right? Not according to Behavioural Economist Roger Martin-Fagg, who debunked the gloomy national newspaper headlines to suggest there are good times ahead for the UK’s economy – and how that should translate to wholesalers.

Martin-Fagg used an analogy of a hose pipe that had been sat on during the pandemic, but with the additional money swilling around in people’s bank accounts, there’s an indication this is being spent, leading to a “bloody brilliant” future to look forward to.

Throughout the day, several senior figures from top wholesalers and buying groups – including Sugro’s Neil Turton and Yulia Petitt, Brakes CEO Hugo Mahoney and Costco’s Sue Knowles – discussed their work and how they’ve continued to work through issues.

Although it was possibly Unitas Managing Director John Kinney who had the strongest messages, asking supplies to get back into wholesale to see how things have changed since the pandemic hit. And for them to understand that while digital is important, there is still a role for the humble cash and carry and should still be receiving investment when it comes to looking to the future.

Diversity was also on the agenda in the final session of the day, with Women in Wholesale Founder Elit Rowland taking up the baton. Rowland shared research that showed 28% of women asked in a recent survey felt lack of respect was the biggest barrier to their career identifying an area for improvement, despite all the big movements in the sector since.

A revealing session with TWC Director Tanya Pepin and Bestway Trading Kenton Burchell also looked at healthy eating. One of the biggest numbers revealed in TWC’s research was that 75% of retailers felt wholesalers should increase their range of healthy food, but as Burchell explained, in such a low-cost, low-margin sector, it’s difficult to dedicate the time to do this.

That wasn’t an excuse to do nothing though and Bestway’s work to raise awareness among their customer base showed the biggest issues were lack of space to diversify and a misconception healthier food was more expensive. It showed that education was a big part of this, which Burchell explains was brought to life by in-depot promotions.

It was an upbeat way to end the conference and provided some optimism for the sector to look forward to.