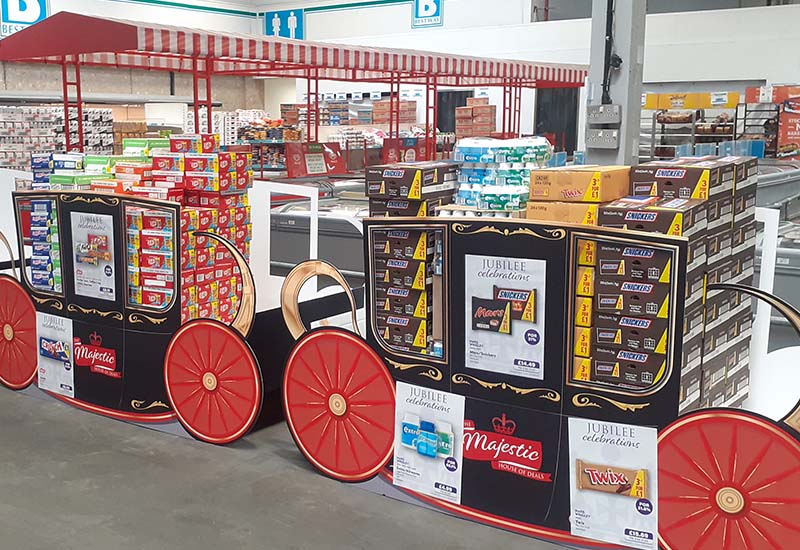 Bestway has paid homage to the Queen in its own way with a special Platinum Jubilee promotional campaign.

Featuring in depots across the UK, the Majestic Palace campaigns is backed by more than a quarter of a million pounds of investment – and seen promotional spaces transformed into royal-themed displays.

Creating theatre, fun and visual appeal, displays include a large, pre-fabricated palace opening its doors within the main thoroughfare of its depots surrounded by chariots, horseman guards and, of course, the Queen’s crown jewels.

Retailers can enjoy visiting the amazing majestic palace which spreads summer jubilee cheer and gives an immersive, impactful and emotional experience – and hopes to have as much success as Bestway’s Your Home This Christmas campaign at the end of last year, which led to an estimated 20% increase in sales.

Large digital screens will highlight special products, retailer promotions and supplier content. The campaign will also be supported by a series of competitions including best depot display and various supplier competitions with some great prizes to win.

Bestway is also supporting The Queen’s Green Canopy Initiative by inviting suppliers to support retailers by sponsoring the planting of trees in their area.  Bestway has confirmed that it will match all donations made by suppliers.

“We’re looking to create more theatre and excitement in the depot for our cash and carry customers,” said Trading Director Kenton Burchell.

“If we can generate that level of enthusiasm and inspiration with the retailer in depot, then they’ll get behind it in store, which will help grow their sales.

“The key is having the right product at the right price and having the theatre to bring it to life. These things co-exist. One thing on its own is not going to optimise the opportunity.”