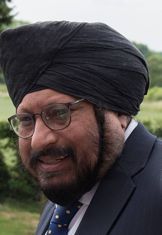 Don Wouhra passed away on Sunday 10th May after a recent illness.

Don’s main role in the business, as well as being the joint owner, was trading director for the two successful Cash & Carry depots.

He was one of the most popular figures in the wholesale trade and known for his hard work, and business acumen, but more importantly as a kind and caring gentleman, who would do anything for anyone.

Don also had a wicked sense of humour and loved playing tricks on his friends.

He was a key part of the success that Landmark Wholesale enjoyed in the 90s, up until its merger with Today’s in 2018.

Every time he visited central office, Don would walk both floors, saying hello to every one of the staff.

Being part of three different meetings would sometimes mean being in the Milton Keynes Office three times a week, but Don never missed a meeting and never complained about the time pressure this put on him personally, or his own business. He always shared his knowledge and information for the greater good of the group and its members.

He was also a key figure on the Landmark Wholesale conferences, being first up in the morning, 100% engagement with suppliers and other members during the day, and last to bed at night!

Don was known as the hardest working member at the conference, giving his time to every supplier who wanted to see him.

Don will be sadly missed by all of his many friends and colleagues.